Motor control prior to movement onset: preparatory mechanisms for pointing at visual targets Otmar Bock , Karen Marie Arnold. In order to address this issue a second experiment was conducted where online visual position feedback was provided during movement production. Eighteen healthy individuals 12 F, 6 M , with a mean age of Two participants participated in both experiments.

Each trial started with participants moving their limb such that the red dot would be located at the home position. A visual fixation cross was then presented in the location of the movement goal at the beginning of every trial up until the presentation of the go signal.

Participants were required to fixate the cross during the trial, despite the provision of visual feedback. The warning tone was presented, and after a random foreperiod of to ms the acoustic go-signal was presented. Participants moved as rapidly as possible to the location where the fixation cross had been between the two vertical lines on screen. Following movement completion and once the mask had been removed, subjects verbally stated which leg of the pi figure was longest as well as their confidence in the choice.

Data collection, data reduction, and analyses were conducted like in Experiment 1, except that the foreperiod FP condition was replaced by the PV-FV condition.

Given these results, the degradation in visual processing i. Inspection time has been suggested to provide insight into processing time for visual perception [ 8 , 10 ]. To test visual processing, a perceptual IT task was completed prior to and during a goal-directed limb movement.

We expected that if visual processing is upregulated at peak-limb velocity then presentation of the IT stimulus during the fastest part of the movement would result in improved IT performance in comparison to that observed in the NM condition. Likewise, if visual perceptual processing was enhanced by motor preparation, then performance in the IT paradigm would be better when the IT stimulus was presented during the RT foreperiod of a goal-directed limb movement in comparison to when it was presented while sitting idly NM condition.

These expectations were based on previous literature that found improved visual perceptual ability when visual stimuli were presented during a RT foreperiod [ 2 ] and at peak-limb velocity [ 3 ]. Contrary to expectations, however, the first experiment showed that performance on the IT task in the FP condition was not significantly different from performance in the NM condition, providing no evidence for visuo-perceptual enhancement due to motor preparation.

In the PV condition, performance on the IT task was significantly poorer in comparison to the NM condition, even though the stimuli were presented at similar times following the acoustic stimulus Fig 3A. Moreover, the second experiment replicated and confirmed these results, and showed further degradation in IT performance when online visual feedback was provided Fig 3B. One possible explanation for the decreased performance seen in the IT task when it was associated with movement may simply be reflective of the allocation of limited attentional resources.

That is, it is possible that participants used selective attention to filter and process visual information that was essential to the motor task [ 11 ] and thus actively inhibited non-target-related information the IT stimulus [ 12 ]. Similarly, the indirect nature of the feedback provided cursor-based versus direct feedback may have led to an increase in attentional requirements, although further study is required to investigate this possibility.

Alternatively, it is possible that participants prioritized the movement task over the perceptual task by predominantly attending to task-relevant visual stimuli [ 13 ]. Indeed, a number of experiments have shown degraded secondary task performance when the primary task involves manipulandum-based movement execution. For example, Bratzke and colleagues [ 14 ] used a psychological refractory period paradigm involving a ballistic left arm movement, followed by a right-hand key-press task and found performance decrements in the second task, which they attributed to execution-related interference.

Similarly, Maslovat and colleagues [ 15 ] showed that performance of a continuous manual tracking task reduced the attentional resources available to perform a secondary wrist-extension RT task. Although both these previous experiments involved multiple motor-based tasks, a similar effect may have occurred in the current study whereby response execution of the movement task interfered with the processing of other responses. A second possible explanation for the poorer performance in the IT task during the movement related conditions compared to the NM condition involves the presentation location of the visual stimulus to be discriminated.

In the two experiments presented here, the visual stimulus was presented in focal vision. In contrast, in the previous study by Tremblay and Nguyen [ 3 ], visual stimuli were presented six cm below the fixated reach target i. Given this, it is possible that focal and peripheral vision may be processed and weighted differently during a goal directed movement, such that peripheral vision is enhanced at peak-limb velocity, while focal vision remains unaffected, or indeed degraded. In support of this proposal, Cao and Haendel [ 16 ] recently showed an enhancement in visual processing of peripheral information during locomotion, a phenomenon hypothesized to occur due to the importance of peripheral navigational cues during this type of action [ 17 ].

It is certainly plausible that in contrast to the perceptual processing degradation shown here, different effects on visual processing may have been observed if the IT stimulus had been presented in peripheral, as opposed to central vision. As such, the ventral stream is thought to be susceptible to visual illusions, while the dorsal stream is thought to resist such illusory effects. The results of the work by Tremblay and Nguyen [ 3 ] may be due to enhanced visual processing of stimuli in the periphery. Alternatively, the increased resistance to the audio-visual fusion illusion they found when the limb was moving at peak-limb velocity [ 3 ] may have been due to improved multisensory processing at peak-limb velocity.

Indeed, these authors suggested a similar possibility with the limb movement resulting in an increased signal-to-noise ratio in the relevant sensory channels. This suggestion is also supported by a study showing that in the absence of auditory cues, performing a fast limb movement degraded the ability to detect the number of visual flashes presented [ 5 ]. While the present results cannot speak to this possibility, they do indicate that the previous results can likely not be attributed to enhanced visual perceptual processing alone.

A secondary finding of Experiment 1 is that no change in IT performance was observed when it was presupposed that participants would be concurrently preparing the limb movement.

This contrasts with results provided by Hagura et al. One explanation for the discrepancy in results between paradigms may be related to when the IT stimulus was presented during the foreperiod FP condition in Experiment 1. In the study by Hagura et al.

In contrast, and similar to our findings, letters that were presented greater than ms prior to the go-signal were identified with a similar level of accuracy regardless of whether or not participants were planning to move. However, one major caveat in the current study is that the level of movement preparation prior to, or during the IT task in the FP condition was not probed. 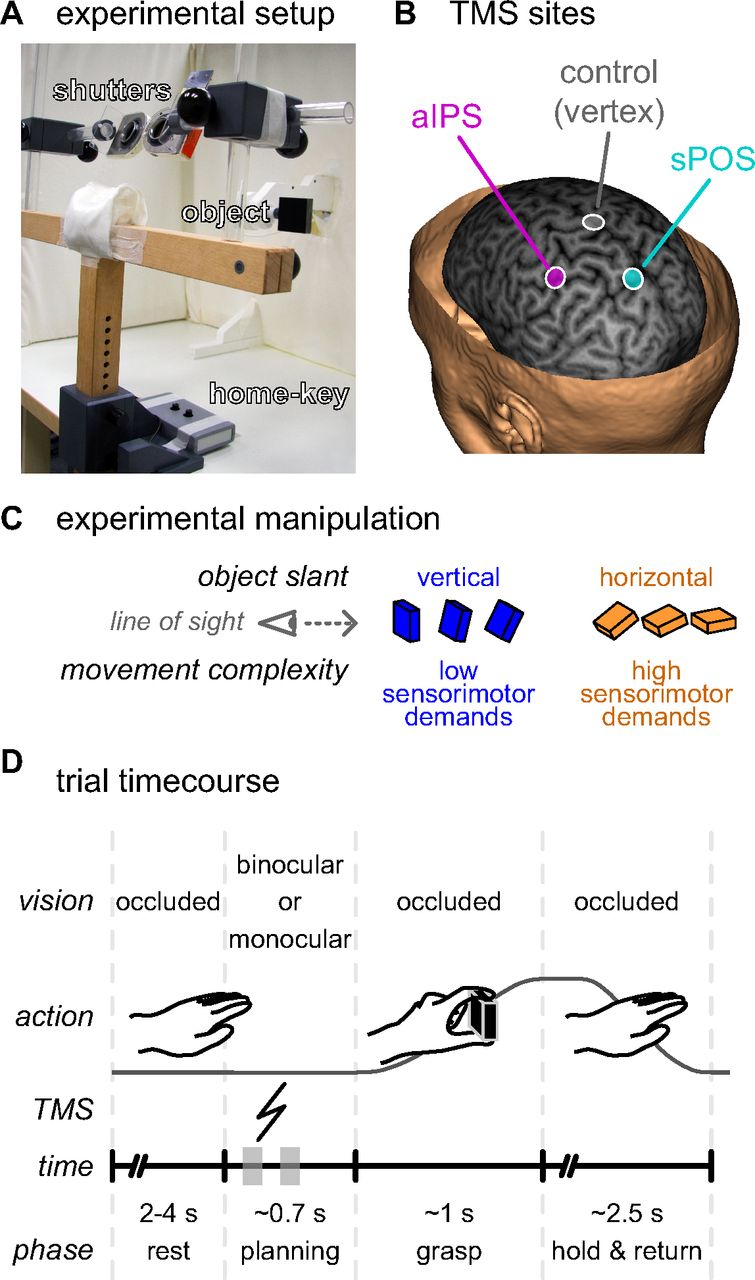 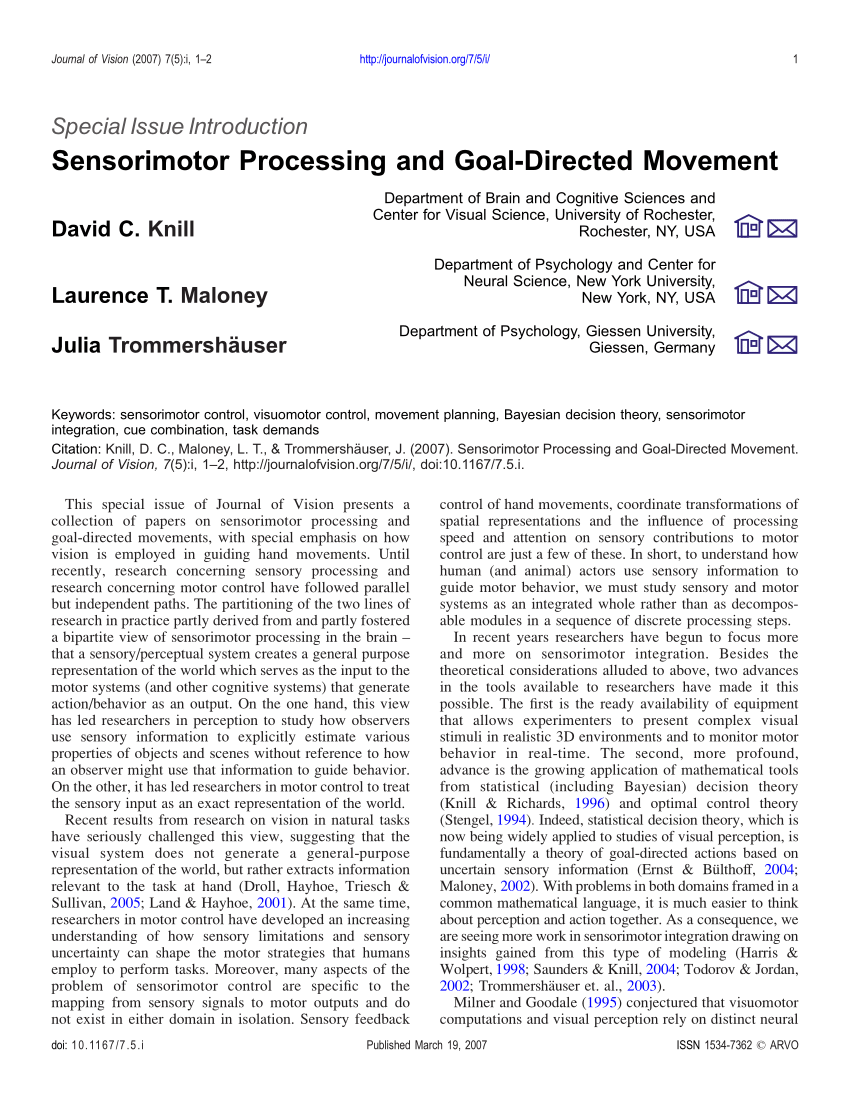 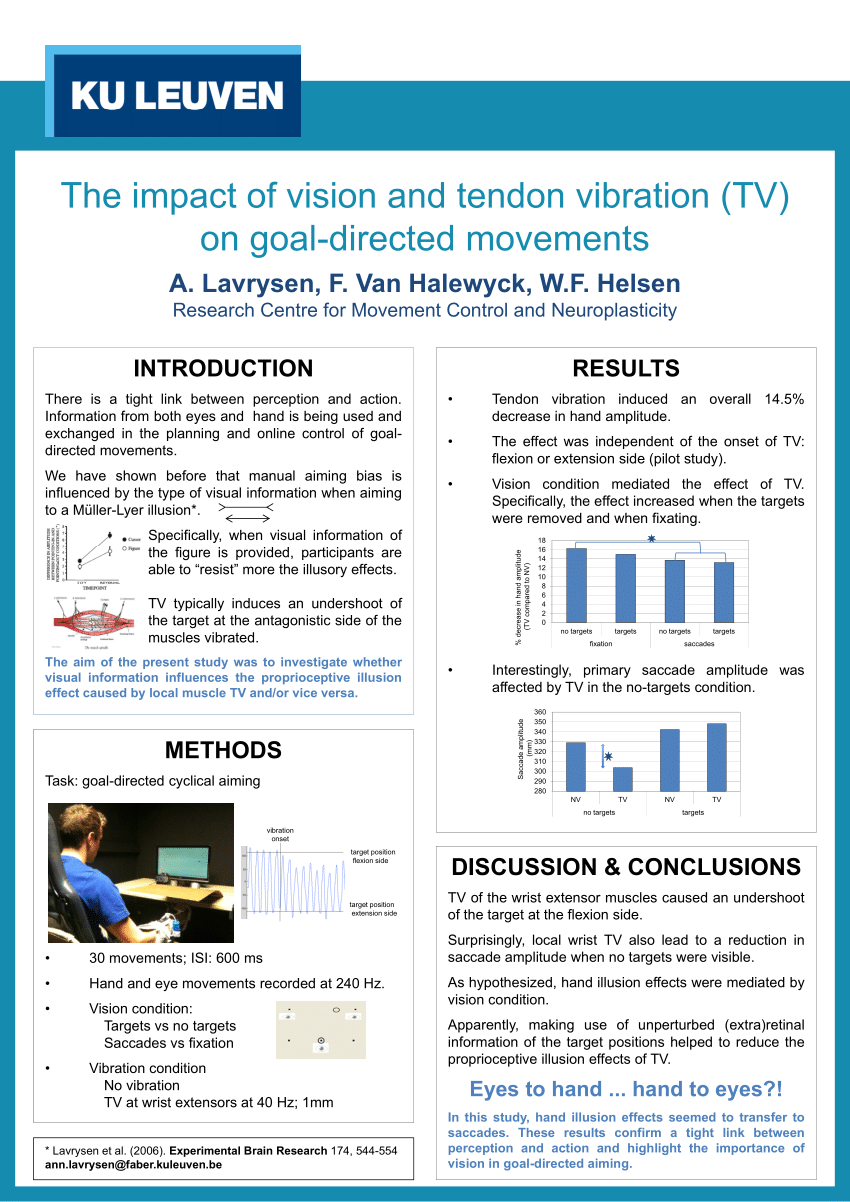